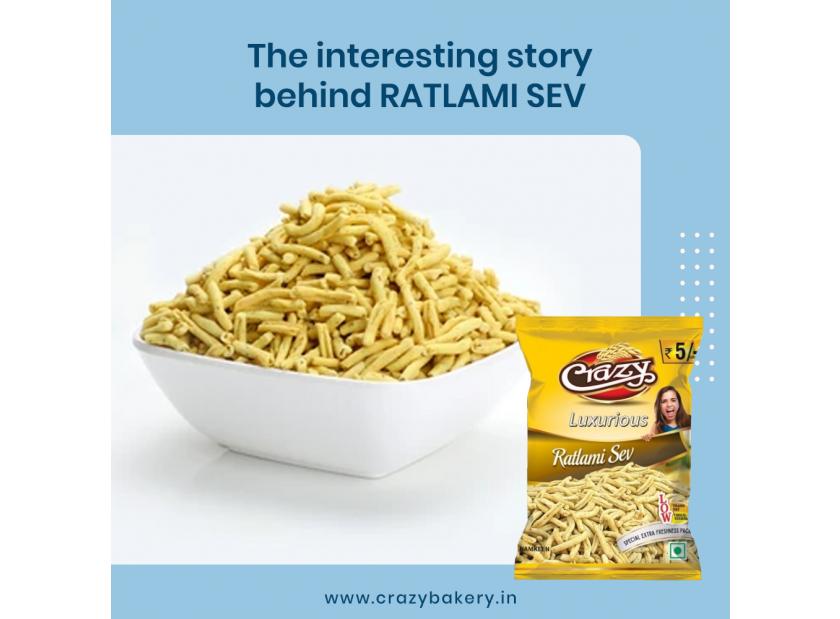 The interesting story behind Ratlami Sev

With just the word Ratlami Sev, we feel the mouth-watering taste. This delectable nibble was created by chance in the nineteenth century. Crazy Bakery, the best bakery in Gorakhpur, in this write up, unfolds the history of Ratlami Sev Origin of Ratlami Sev.

Ratlam, currently a tiny town in Madhya Pradesh's Malwa area, was formerly a princely kingdom with a rich culture and legacy. Formerly known as Ratnapuri, Ratlam is now a major Madhya Pradesh crossroads where most long-distance trains from the west and south of India pass through on their way north.

Ratlam State was created in 1652 by Raja Ratan Singh Rathore, son of Mahesh Das of Jalore, a great-grandson of Raja Udai Singh of Jodhpur. By defeating the Persians and Uzbeks in Afghanistan, the latter, father and son, had rendered valuable military services to Emperor Shah Jahan. Large lands in the southwestern districts of

Rajputana and northern Malwa were given on them as a reward for their services and in honor of their great feats of valor. Ratram, named after Raj Ratan Singh and his first son Ram Singh, became their capital and was eventually translated to Ratlam.

The link between Ratlam and the renowned Ratlami Sev

According to legend, while on tour in this region, the Mughals suddenly felt the need to consume sevaiyan (wheat vermicelli).

Because sevaiyan is made with wheat, which was not available in Ratlam at the time, the Mughals requested the Bhil, the tribals of the region, to make sevaiyan with gram flour, and voila, the delicious forerunner to Ratlami sev was created.

Locals claim that the gram flour sevaiyan, formerly called Bhildi sev, is unique to this town, dating back at least 200 years, and was commercially manufactured in the 1900s. In 2014-15, the Geographical Indication Tag (GI) was awarded to the light yellow crispy sev composed of gram flour and spices.

The use of cloves, pepper, and other spices during the making of this savory Ratlami sev sets it distinct from the others. It's hot and has a distinct flavor because of the unique spice combination. With carom seeds, it has a crunchy yet soft texture and a strong flavor, and its thickness sets it apart from other types of sev.

Uses of Ratlami Sev
This tangy, fragrant crispy sev can be used as a snack, side dish, garnish, or ingredient. Poha, a popular local breakfast, is always served with at least two types of sev. A handful of sev is added to the prepared curries. Sev is so important in Ratlam and the neighboring districts of Madhya Pradesh, Gujarat, and Rajasthan that even cuisine that typically does not require it is given with a few on the side.

So, today let’s find out what & where it could be used-:

• Consumed as a solo snack

What makes Ratlami Sev so unique?

So, what is it about Ratlami Sev that makes it so popular? It's about the quality, flavor, and, most importantly, an attachment. In every chaat, Ratlami Sev is served as a side dish.

• It improves the flavor of the meal.

• It is edible and has a delicious, crunchy, and delectable texture.

• Ratlami Sev is unlike any other SEV in terms of quality and taste.

• The ingredients utilized to make it are of the highest grade.

• Its classic flavor is one of the most significant aspects.

Conclusion:
Crazy Bakery has been a famous Namkeen snack brand offering the best low calorie snacks in the Indian states of Purvanchal, Uttar Pradesh, Bihar, and West Bengal since 1997. This best bakery in Gorakhpur serves more than 20 lakh customers every day from its largest baking plant in Gorakhpur, Uttar Pradesh.

Apart from the Ratlami Sev, they also offer bakery cookies. Crazy Bakery Gorakhpur provides many Bakery products in Gorakhpur. Their Flavoured bar cakes with the latest cake flavours and the best cookies are the most delicious ones that you have ever tasted!